When I was in the 10th grade I first saw the film version of The Great Gatsby starring Robert Redford, and since then it has been the epitome of all things Gatsby for me. Others have tried to capture this tragic hero on film – and have fallen seriously short.  (Yes, sadly, we do remember Paul Rudd‘s attempt).

Finally, the news that Baz Luhrmann (Strictly Ballroom, Moulin Rouge) had signed on to remake this literary classic.  Let the glee-filled, high-pitched screaming commence. Luhrmann’s unique style of cinema that includes vibrant color, rich characters, dramatic story telling, and even a musical number or two, would lend itself perfectly to a new version of this timeless tale – in my humble opinion. To kick up the squealing another notch, it has been confirmed that Leonardo DiCaprio will play the title character, and after a much heated tabloid race, Carrie Mulligan will play his obsession Daisy Buchanan.

Also attached is Tobey Maguire as narrator Nick Carraway who gets caught up in Gatbsy’s lavish world of parties, cars, love affairs, jealousy and money based power struggles the summer he spends at West Egg in 1922.  In symbolic fashion the movie set to be released in June of 2012….I’ll be sure to get out of the pool and see this film opening weekend. 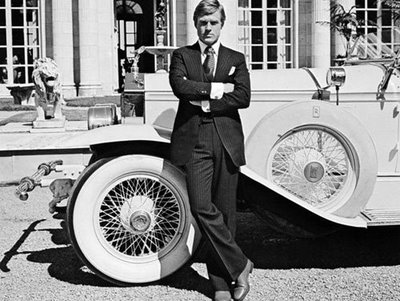 Besides being an awesome AP English teacher, I coach Girls Tennis, and I collect cool pencils. I'm an avid reader and pinky swear (to myself) that I'm going to start writing down what I think about all the books I skim, scan, and slave over. I love to travel and get pedicures. I want to learn how to knit, to speak Italian, and how to edit video on my computer. I love to swim - probably because I'm a Pisces....and I'm a total foodie!! View all posts by Jonesy